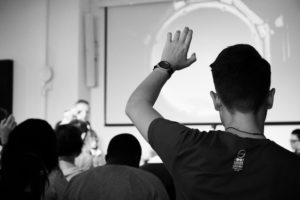 The training “Fundamentals of Citizen Journalism” will be held in a hybrid format (in Tallink Spa Hotel and ZOOM environment) 5.11.2021 at 13.00

The event aims to develop public (civic) journalism and focuses on the development of local news content. Citizenship journalism and blogging serve as a watchdog.

END_OF_DOCUMENT_TOKEN_TO_BE_REPLACED

This summer, we became a platform for the great civil participation of those who care about the world!

“Global Assembly on SDGs” is a high-level conference held in beautiful Tallinn, Estonia, between the 22nd and 25th of August. The main speakers and participants came from many countries (UK, US, Argentina, and many European countries). Many of them are prominent politicians, diplomats, NGO’s, consulting companies, and analytical centers who do their dedication to sustainable development.

END_OF_DOCUMENT_TOKEN_TO_BE_REPLACED

Every parent knows that young children are full of energy, they want to run, jump and play. Transferring this natural energy into competitive sports can help children stay active and healthy as they grow, and other distractions that can lead to more sedentary lifestyles increase. Competitive sports such as soccer, athletics, basketball, and swimming can also help children learn important life lessons about teamwork and fair play. END_OF_DOCUMENT_TOKEN_TO_BE_REPLACED

In the Critical Thinking Project, the discussion asked the question of sincerity and post-truth. Often, especially diverse experts and politicians argue that Russians and Estonians live in parallel infoworlds. During the discussion, the term post-truth emerged. According to the Oxford Dictionary, post-truth means “circumstances in which objective facts influence public opinion less than emotions or personal beliefs.” Because of the prefix, one might think that the term is talking about a situation where we already know the truth, but this is not the case. The Oxford Dictionary has recognized the term as the word of the year 2016, but it often turns out that we are not at all living in an era of post-truth – we live in a world of lies, and have always lived in it.

Post-truth is not a new phenomenon. The entire 20th century is an era of post-truth, an era of ideological and propaganda regimes that seek to manipulate public opinion and the consciousness of people. For all the differences, post-truth regimes had one thing in common: they appealed not to reason and common sense, but to strong feelings and emotions. END_OF_DOCUMENT_TOKEN_TO_BE_REPLACED

For the participants in the training and discussion of the Media Critical Thinking project, attention was paid to the analysis of Russian information sources, since very often one can hear summaries from Estonian journalists and politicians that there are two parallel information spaces. Estonia is too small a country, and those whose native language is Russian, only about 300 thousand people live here, one way or another every fourth is Russian-speaking, and there is no diversity of Russian-language media.

What changed? The number of Russian journalists and the quality of publications in the Russian language, these are mistakes and misprints, grammar and style of translations, and the presence of readers. Although some Russian-language media can rightfully be considered “historical” in Estonia. Thus, the cable TV channel “Orsent”, operating since 1992, is the oldest commercial TV channel in the country. And the newspaper Estonia, which ceased to exist in 2004, was the last periodical in the country to be published on A2 paper, while all other newspapers switched to the more readable modern A3 format much earlier. END_OF_DOCUMENT_TOKEN_TO_BE_REPLACED